Until recently the questions that guided my cooking strategies were:

As you can see, I’ve got some wholesome ideals, but I’m no Martha Stewart. No one comes to my house expecting three course meals, matching china, or even a napkin, really (or it’s best not to).

But I’m getting slightly more civilized. I just finished Michael Pollan’s new book Cooked. It has inspired me to put a little more attention to “building flavors” and the alchemy of timing and temperatures. This book taught me about a new primary flavor called umami- it’s a savory yummy flavor. Kombu seaweed actually excretes crystals of it. (I swear this is what he says) Following Pollan’s suggestion I was able to re purpose a rind of Parmesan cheese for the first time. How cool! 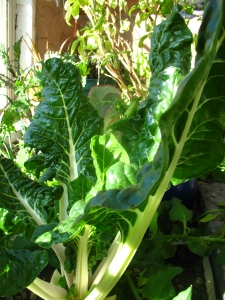 I adapted his recommendations for building flavor into a stew to solar cooking. I’m blessed to have both a high temperature solar cooker, the parabolic, and a slow cooking box style oven. They both helped me and Andy make the perfect stew. It involved many stages of cooking and mixing, and still we did a bunch of other unrelated things today too.

Here were the main elements of the process:

We chopped two onions finely, added a bouquet of freshly picked parsley from the greenhouse, along with some carrots and garlic and homegrown coriander. We put this in the box cooker. The swiveling one outside the front door, so we could catch the morning sun.

We boiled a bunch of potatoes with vegetable broth on the parabolic cooker,

turning it a couple times as the sun moved through the sky. It was afternoon before we combined these dishes in a big pot and added the browned buffalo chunks. Oh, and we salted the buffalo a few days before, and stuck it back in the refrigerator. The salt pulls moisture out at first, allowing the meat to absorb all the tasty goodness of the broth once it has the chance.

About the buffalo meat: I was a vegetarian for over 15 years. This was due to my disgust with factory farming conditions and the impact of growing a country’s worth of poison riddled corn to feed cows, to feed the US population who would be healthier with a lot less. Now I eat free range organic meats (preferably lo

cal) on average two or three times a month. Stews are a great way to make a little bit of meat go a long way.

We could have browned the buffalo on the parabolic, but we were alternating this with cooking beans, so we used the propane stove inside. We have a rule of thumb for the propane stove. We limit the use of it to 15 minute chunks. That way we won’t grow dependent on fossil fuels as a main cooking source and we only use about 7 gallons a year. But it allows for early morning tea and omelets, quick quesadillas, and reheating things.

We mixed the slow cooked onions and veggies together with the buffalo, added some chopped chard also from the greenhouse, some red wine, water, and a puree of leftover pinto beans- and the Parmesan rind! We brought it to boiling on the parabolic, and put it back in a slow cooker for the rest of the day. We stuck the stew in the fixed one that we can access through the greenhouse. That way there would be not need to put on a coat to retrieve it come dinner time. I should mention that it’s winter- the short days of early January, and even now there’s plenty of sun to meet all our needs for hot showers, electricity, and the supreme flavor-constructed solar stew.

Wish you could taste it. Definitely the best one we have made yet, and of course extra magnificent the next day. Maybe Martha Stewart can help with the napkins.

Inspired to build your own Solar slow cooker? Here are the construction plans.

Ampersand began with a a couple dreamers and a dream. Amanda and Andy knew they wanted to create something- a hub for the emergence of a way of living that re-imagines human relationship with the earth and each-other. If folks want to buck a culture of consumerism and commodification, there is a lot of learning to do. The task at hand is not just learning about rain catchment, solar ovens and simple living, it’s also about exploring giving, receiving, beauty and healthy communication.

So why is it named Ampersand? The ampersand (&) is the name of the Greek symbol for AND. While the vision began with AmANDa and ANDy, they knew that they would not be doing it alone. Far from it. There would be collaborators AND mentors AND students AND neighbors AND friends who were just as crucial to the project. Ampersand is and invitation to co-create the world we want.